A few days ago, a new billboard advert appeared opposite our office. Initially, I didn’t pay it much attention and it was only when I looked at it more closely that I realised this: I had absolutely no idea what or who it was advertising.

The ad features the words “PRETTYLITTLETHING” in capitals, a small ‘x’, an unintelligible signature, and a photo of a model in what looks like some sort of Dash-esque shellsuit (showing my age, there).

At first, I assumed that the words were the strapline of a fashion range launched by one of those modern-day celebs who are Internet-famous without people of my age having a clue who they are. I assumed the signature was of the celeb, who may or may not have been the woman in the picture. (Incidentally, what do you think of the pose? It’s pretty provocative, which has raised an eyebrow or two with some of my colleagues).

Considering I could only really make out the capital K, I idly wondered whether it was one of the Kardashians. The sum total of my knowledge of the Kardashians is that they have a lot of first names that begin with a ‘K’, and this seemed to tick that box.

It’s not them, and at this point I appreciate that I sound like someone’s grandad. 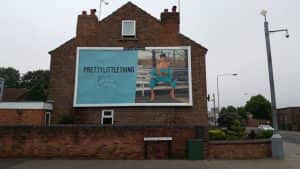 So, being a gentleman of a certain age, I asked a (much) younger colleague to also take a look. Could they tell me a) who the poster was advertising b) who the signature belonged to and c) who the woman was?

It transpires that my younger colleague knew that Pretty Little Thing was a clothing brand. Win! However, they had no idea who the signature or the woman was, and so we had to head online to find out more.

According to the Pretty Little Thing online store:

“Karl Kani’s iconic streetwear classics get a reboot for new season as two fashion eras collide. Teyana Taylor goes back to her roots and hits the streets of Harlem representing the originator of urban fashion. Staying true to the 90’s legacy, this drop is all about paying homage to the styles of the Karl Kani movement that infused hip hop and street culture. Think sporty separates, fresh outerwear and denim with an urban edge. This is the collab to take your look all the way up.”

Now. If I were the sort of person who is interested in taking my look ‘all the way up’ (whatever that means) then it’s quite possible that this advert talks to me, and that I know exactly what it is saying. The target audience for 90s-inspired streetwear might be all over this billboard and it might be doing an amazing job.

(At this point I would note that this billboard is adjacent to the Arnold and District Victory working men’s club. It’s also opposite a Sainsbury’s superstore. It’s hardly in a location frequented by the sort of people you might think would be wearing Pretty Little Thing clothes. This is a whole separate issue in itself.)

Or, is the fact that a forty-something gent has no idea what is going on precisely the point? Are Pretty Little Thing deliberately only talking to their own customers? (quite how many of these frequent a working men’s club is another question altogether).

Perhaps the problem is that I owned a ghetto blaster like that back in 1988, and I am sure I saw designs like that a quarter of a century ago. Still, that’s hardly Pretty Little Thing’s fault, is it?