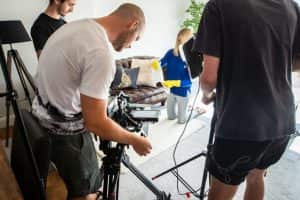 It’s not every day that your work takes you to a film set. Yet, that’s where half a dozen of the Diversity team found themselves last week as our latest video production project reached the filming stage.

We’re currently working on the relaunch of a client’s brand and website. The project involves everything from SEO research and creating a new brand proposition, to wireframing and designing the brand-new website.

As part of the content strategy, we want the new website to be the go-to place for tips and advice.  While we’ll answer some common questions  through blogs and ‘how to’ articles, we also want to create a range of videos which provide useful insights and advice.

Having undertaken loads of research into the most common types of question (including a lot of SEO and keyword research) we came up with a list of video titles. We then created video storyboards and scripts.

Our aim is to give these videos some personality, by creating very relateable home environments and situations. We also want to make the videos more than just a ‘how to’ explanation. We want to create little stories which contain all the key information and advice, but in a way that is more engaging with our client’s audience.

Having created the storyboards and scripts, we then cast our ‘Lisa’ character. Lisa’s job is to be the new face of the brand, so it had to be someone friendly and kind and whose advice you’d trust. Having met and chatted to a range of great people, we eventually chose Katie who became the first piece in the jigsaw.

The rest of the pieces involved a location, props and both animal and human extras to play the ‘parts’ needed in the videos. A colleague’s partly-built new home gave us a blank canvas to create a couple of sets. Other colleagues brought along their dogs, children and props to feature in the filming. This is Toto, the rescue pug…

Never work with children or animals (!)

It was an early start as the camera and sound crew set up on a scorching hot Monday. The first day of filming involved both toddlers and dogs and so there was plenty to get through. Of course, making dogs and toddlers do exactly what you want on cue isn’t that straightforward – never work with children or animals! However, as the day went on we got more and more of the shots in the can.

With ten videos to film over three days there was plenty of time pressure and shoots did run into the evening once or twice. However, with a production team keeping everyone fed and watered (and ensuring that all the necessary people/animals/props were where they should be) the whole three-day shoot went really smoothly. By the end the video team had captured all the footage they need. 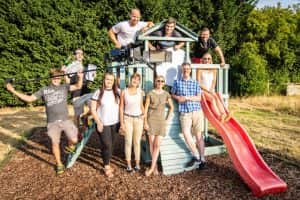 Estimates suggest that video will account for 80% of internet traffic by 2020. Our skills in scripts, storyboards and video production is likely to be critical to our clients… although perhaps we’ll leave dogs out of the scenes next time!